Unity of Austin is built on a powerful, prayerful awareness of Jesus Christ, the consciousness that remains the strength of this church.

The Divine idea that established Unity of Austin came through Kelly Ponder, a dedicated Unity student who had relocated from Birmingham, Alabama, to teach on the English faculty of the University of Texas. He was determined that there should be a Unity church in the Texas capital!

Upon advice from a Unity minister who would later become his beloved wife, Kelly Ponder started a prayer and study group. The group affirmed: Jesus Christ in the midst of this study group now draws to Himself His own divinely appointed minister to develop Unity in Austin. Who knew that in time the minister called to this work would be Catherine Ponder! Unity of Austin was founded in 1961 with Rev. Ponder as Minister.

The first services were held in the historic Driskill Hotel. Catherine Ponder, through her dedication to Truth expressed in writing, teaching, and lecturing, has blessed countless numbers of people. She is internationally known for teaching and living the spiritual principles of prosperity, healing, and prayer. Learn more about the beginning of Unity of Austin and about Catherine Ponder in her memoir, A Prosperity Love Story.

In 1979, Unity of Austin moved into a small house on Del Curto Road in South Austin. With the building of a sanctuary addition under the leadership of Rev. Jim Dawson, and the later purchases of adjoining land and structures, the church enjoyed many years in the beauty of this park-like setting under the oaks. In this period the congregation made three efforts toward re-locating. Land was purchased and sold on two separate occasions.  However, the time for moving was not yet ripe. 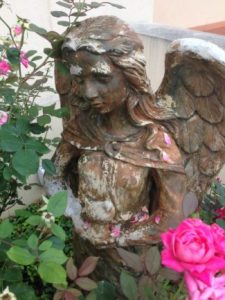 In 2007, under the guidance of Rev. Analea Rawson, the congregation voted to sell all of the church property and buildings and to purchase an existing building on Hwy 290 in southwest Austin. The congregation engaged in a focused period of prayer, and an eager buyer came forward easily and promptly. A beautiful and dynamic renovation completed in 2008, and the addition of an office building in 2010 created the peaceful, welcoming space that is now our church home.

Today Unity of Austin is a vibrant and growing spiritual resource for Austin and the Unity movement. We are an open-hearted, welcoming, progressive spiritual community committed to studying, teaching, and living the universal Christ Consciousness as expressed through the life and teachings of Jesus Christ. We are a participatory, inclusive community working together to bring forth God’s highest good for our church and for our involvement in the world.

Our Senior Minster, Rev. Anna Shouse, Ph.D., began her ministry at Unity of Austin during Easter 2014. Ordained a Unity minister in 1995, Rev. Anna is committed to the development of healthy, vibrant Christ Conscious community that ever more fully expresses the Living Body of Christ.

Unity of Austin is who we are today because of the spiritual dedication, prayerful consciousness, principled giving, wise decisions, hard work, and spirit of fun of all who have participated in this church throughout the years. Congregants, attendees, Board members, Staff members, Volunteers and Ministers have each added a special measure of God’s love, peace, and vision. To each and every one we express our deepest heart-felt gratitude. While we regret that space does not permit a full listing of all who have served in leadership capacities in Unity of Austin, we do invite you to review with appreciation the Ministers who have served this congregation.