It’s All About Love – Heartnotes 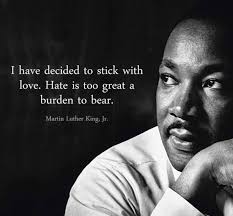 It’s All About Love

“For your steadfast love is before my eyes, and I walk in faithfulness to you.” Psalm 26.3

Week after week college student Derek Black’s friends invited him over for Friday night dinner.  This was a really big deal– it changed his life.  Derek is the son of Don Black, a grand wizard of the Ku Klux Klan and founder of the white nationalist website Stormfront.  He was his father’s designated successor and though only in his late teens at the time, had been actively spreading hateful ideology for years.  College introduced him to a broader world, where his classmates mercifully called him out on his misinformed beliefs.  And some took the daring risk to befriend him while standing firm in their own understanding of the worth of all people.  The friends whose Friday invitation he accepted week after week are Jewish and their invitation was to Shabbat dinner.  They knew full well who Derek was and what light his ideology cast them in.  And they invited him anyway–hoping that by cordial yet frank interactions, he would start to see the humanity they all shared.  It worked.  Through the courageous conversations initiated by many of his classmates and Derek’s own willingness to open his mind, his life was transformed.  In 2013, at the age of twenty-two, Derek wrote an article published by the Southern Poverty Law Center denouncing white nationalism.  His turn-around was not quick and it was not easy.  It happened because there were people who cared enough to reach out to him in love over and over again. They did not give up.  Building relationships is a slow process, and not everybody wants to build bridges.  Sadly, some prefer walls.  But that should not stop us from loving.  Love comes in many forms – it’s not always sweet.  It is however, always compassionate and always honest.  As we let the mighty power of love flow through our hearts it spreads out into the world.  Authentic spiritual love always touches with respect.  It whispers reverently even to those whose hearts and minds are scared and tightly clenched, who can’t yet be in connection.  We are called to love, just love.  As we do, God always ensures that the outcome is amazing.

In the Love and Light of the Christ,