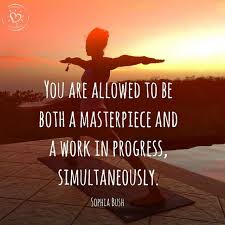 Popeye Got It Right!

Once as I was riding my bicycle on a bike trail, I encountered a woman on roller blades stiffly inching forward as she held onto her husband’s sturdy arm.  She gave me a sheepish smile as I passed by.  I said, “You’ve got courage to be out on those things – mine are still sitting in my closet!”  Her supporter responded, “It’s her first time on skates.”  I called back, “Now I really am impressed – you’re doing great!”

It’s an odd human trait that we think we should be able to do something perfectly from the get go.  How can we know how to do what we we’ve never done?  How can we learn what we’ve never been taught?  How can we be proficient at what we’ve not yet practiced?  In my years as a minister, I’ve found that people often feel inadequate in the area of spirituality.  Years ago I held a weekly meditation time and only after it had been going for a year did the participants begin to acknowledge that they felt terrible about themselves because they “couldn’t quiet their minds.”  I’ve also heard people put themselves down because they “couldn’t keep a positive attitude.”  I’ve heard people say they felt embarrassed because they “didn’t understand the Bible.”  I’ve heard people say they feel inferior because they aren’t having “mystical experiences” in meditation.  I understand these feelings – I’ve had them too.  Yet, I always feel sad when I hear someone judging themselves for a “poor spiritual performance.”  The very essence of spirituality is Popeye’s philosophy of self-acceptance – “I am what I am.”  We’ve gotten the perfectionistic idea from thousands of years of external rule based religion.  It doesn’t work.  We reclaim our power as God’s people by knowing fully as Jesus taught, “the kingdom of God is in the midst of us” and the apostle Paul, “the law is written on our hearts.”   We let go of all forms of inadequacy before God.  We expand our idea of God as our Friend, Helper, Support, and Guide.  We know that God is on our side – how could that not be! For we are expressions of God.  Understood this way, spiritual growth is not a matter of “doing it right.”  It is instead the building of relationship—with ourselves, with Spirit, with others.  God loves us–that love extends within to ourselves and expresses out to others.  And that is enough!

In the Love and Light of the Christ,